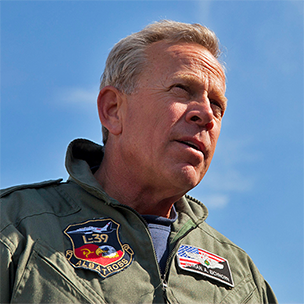 In 2016, Adrian Eichhorn flew his Beechcraft Bonanza around the world. This time, he’s flying over the top!

Adrian will begin his journey Thursday, May 6 from his home base of Manasses, Virginia. The expected two-week mission will take him north to Maine, threw Canada to Newfoundland, then Iceland and on to Norway. From Norway he will transit the North Pole then head south to Alaska before ending in Portland, Oregon. Although this is considered a solo flight, he won’t be alone the entire trip. He will be joined by fellow pilot and Bonanza buddy, Shinji Maeda, for part of the trip. Eichhorn and Maeda will leave Virginia and fly to Iceland where the two will then part; Adrian will head north while Shinji will continue his trip to Europe. The two friends will reunite in Alaska before heading home after Adrian transits the North Pole, flying solo.

To help Adrian navigate the polar skies, his 1962 Beechcraft P35 is equipped with the Avidyne IFD550 FMS/GPS/NAV/COM and the AMX240 Audio Panel including the Dynon three-screen SkyView HDX system.

Who, or what, inspired you to become a pilot?

My father was a pilot for the United States Army Air Corps (USAAC). The USACC was, at the time, a branch within the US Army before it became the United States Air Force. When I was 8 years old, my father sat me next to him in a DeHavillland Beaver airplane and started the engine. Listening to the whirl of the engine, I was immediately hooked. I decided right then and there I wanted to fly airplanes. It was struggle at times but I saw my dream through. From becoming a private pilot to flying for a major airline, I credit my father.

What was your most memorable moment during your flight around the world?

There are a lot of memorable moments, but the one that stands out the most is when I crossed the North Atlantic and landed in Normandy. I told Tom Haines who joined me in France for a portion of my around the world flight that flying over Omaha Beach Normandy where D-Day happened was on my bucket list of things to do someday. That Saturday afternoon we did just that. We flew over Omaha Beach where so many service members were lost. I flew at the same altitude, at 1,200 feet, when they dropped the paratroopers that fateful day. It was surreal. Just to get that kind of experience and perspective. I’ll never forget it.

See images of the Omaha Beach Normandy fly over on flybluehorizons.com

Tell us more about the Fellowship of Aviators?

In the beginning, it was about my training and the airplane; making sure I got my hours in, the right certifications, improving the airplane with the best upgrades. As I got older, it was no longer about the plane or the proper credentials; it became more about community. I’ve met so many wonderful people, young and old alike, who all share the same passion for aviation as I do. I’ve met my best friends and some of the most amazing people in my 33 years of flying. Together, we make up the Fellowship of Aviators. While we all love to fly, but we enjoy giving back to the community that has awarded us so much even more. I’ve had a blessed life and I love teaching. If I can share my experiences whether it’s through flight instruction, training, seminars or speaking to a group of future aviators, it makes it that much more worth it.

When I flew around the world, I said I would never do it again. It sounds glamorous, but there were some lonely moments when I wondered what the heck I was doing up there. But once the dust settled I felt inspired to do it again. To experience it, flying over the top of the earth, and just to say I’ve done it, is enough reason to plan the trip. There is a great deal of risk to fly the North Pole in a single engine plane. But I’m a goal-oriented guy. I’ll be flying my Bonanza, with two friends who also fly Bonanzas. A friend, who owns a Lancair IV will also be joining us. Who knows? This could be a warm up to even more adventures. Maybe the South Pole will be next.

You completely overhauled your panel recently. Why did you choose Avidyne?

Put simply, I wanted something different than what everyone else has. Avidyne was recommended so I did some research. I soon learned that the display is better on the IFD and user interface is far superior. I could have went with the competition but was concerned over the lack of support and functionality that I wanted. Avidyne is not known as industry guerrilla but has far better products. We need to let the pilot community know there’s a better option out there than what appears to be same standard.

If you could give your younger pilot self some advice, what would it be?

Run to the airport. Don’t walk.

Not every flight is going to be comfortable and there will be moments of self-doubt. Keep going.

I remember a flight when I was a private pilot I was flying out of Oakland, CA. That’s where I learned to fly. I was in a Cessna 150, flying over Berkley Hills. It was high winds, hot and extreme turbulence. It was unexpected and frightening but I got through it. I felt huge sense of accomplishment that day.

Are you a Pilot Club Member and have a pilot friend ready to purchase?

If your referral results in a purchase, you could be eligible for a $100 gift card.

We appreciate our Avidyne pilots. Put simply, we wouldn’t be here if it weren’t for you! That’s why we created the Avidyne Pilot Club.

The Avidyne Pilot Club is an elite group of pilots who share more in common than just the joy of flying; they love their Avidyne equipment. As a Pilot Club member, you gain exclusive access to insider news, Avidyne gear, merchandise, and special benefits. What’s more, if you tell a pilot friend about Avidyne and it results in a purchase, you could be eligible for special offers, discounts and possible upgrades.

To be eligible as a member, you must be a current Avidyne customer in good standing, be registered on MyAvidyne.com, and your friend or colleague must purchase an Avidyne IFD-Series unit.

On Facebook? Join the Avidyne Pilot Club Group for the latest news, updates and promotions! https://facebook.com/groups/AvidynePilotClub